New Delhi: Known for his strict fitness regime and healthy lifestyle, Bollywood ‘Khiladi’ Akshay Kumar is an epitome of fitness. However, the actor on Thursday shared a picture of his mother doing yoga to mark the International Yoga Day.

Akshay’s 75-year-old mother doing yoga can be seen sitting with her feet joined and eyes closed as she meditates.
The ‘Proud’ actor praised her mom for practicing yoga and making it a part of her daily routine even after a knee surgery.

“Sharing something I’m extremely proud of…post her knee surgery at the age of 75, my mother started doing yoga and now it is part of daily routine, improving one day at a time. #NeverTooLate #BreatheInBreatheOut #InternationalDayOfYoga,” he tweeted. 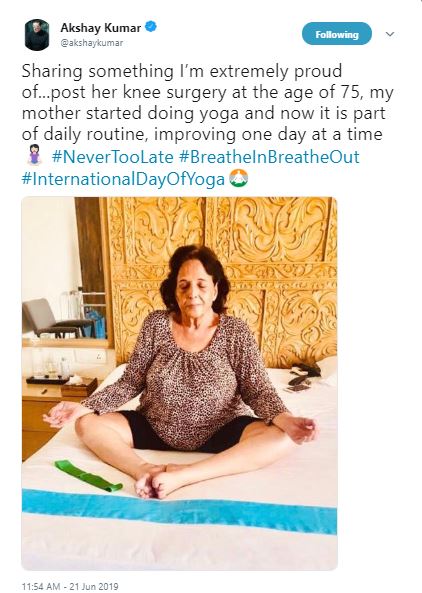 Bollywood actor and yoga enthusiast, Shilpa Shetty Kundra performed and addressed a large crowd that had gathered to perform yoga in Mumbai.

“Yoga has benefited me in many ways and it is something I practice every day and not just on Yoga Day. The younger generation is a single oriented goal focused youth who is breathing but not living the moment. I believe we should give time to ourselves for yoga. Yoga helps in enlightenment,” she said.