New Delhi: Taking her fans down the memory lane, Janhvi Kapoor posted a beautiful picture of her parents- Boney Kapoor and late Sridevi, which is the best thing on the Internet today.

The actor shared a throwback picture of her parents on Instagram today, where both can be seen sitting hand in hand with smiles on their face. In the click, the legendary diva Sridevi is seen donning sunglasses and a coat. Sporting a casual look, Boney can be seen wearing a white t-shirt and gazing at his wife with admiration.

The actor who made her debut in the Bollywood industry with ‘Dhadak’, captioned the picture with a heart emoji. 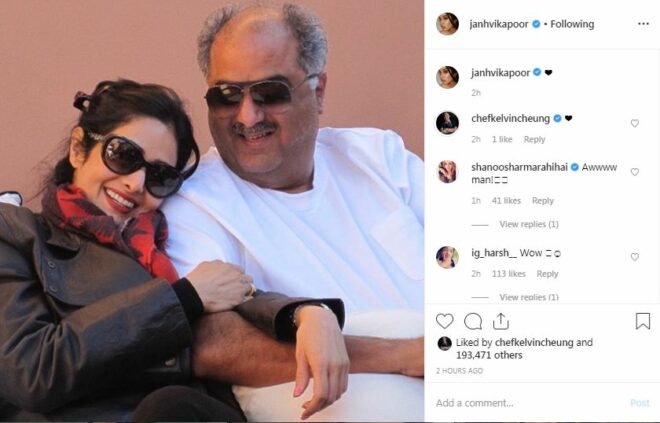 The fond memory shared by the actor will definitely bring a smile on your face today and will also take you back in time.

This is not the first time that Janhvi is seen posting pictures of her mother on social media. The actor who is still overcoming the huge loss is often seen recalling the time she spent with her mother by sharing some throwback pictures on Instagram.

Some time back, the actor posted an adorable picture of her childhood along with her mother and wrote, “Cherish them, listen to them, give them all the love in the world [?] Happy Mother’s Day,” she wrote.

It has been more than a year since legendary Sridevi’s untimely demise and the world is still mourning the loss of India’s first female superstar. The Bollywood star tragically passed away at the age of 54 due to accidental drowning in a bathtub of her hotel room in Dubai.

In a career spanning five decades, she was known for her portrayals of women in challenging situations, and she has appeared in a range of genres, from slapstick comedy to epic dramas. She is known for films such as ‘Himmatwala,’ ‘Mr. India,’ ‘ ChaalBaaz,’ ‘Sadma,’ ‘Nagina,’ ‘English Vinglish’ and ‘Mom’ among others.