New Delhi: After sharing the first glimpse from ‘Kalank’ yesterday and releasing the first look character posters of Varun Dhawan and Aditya Roy Kapur from the multi-starrer film, Karan Johar teased fans with the first look of Sanjay Dutt from his upcoming production as formidable Balraj Chaudhry.

KJo took to his Instagram account to share the first look of Sanjay, who appears to be the wisest of the lot. He wrote, “The most powerful voice of the table, the formidable Balraj Chaudhry. @duttsanjay #MenOfKalank #Kalank.” 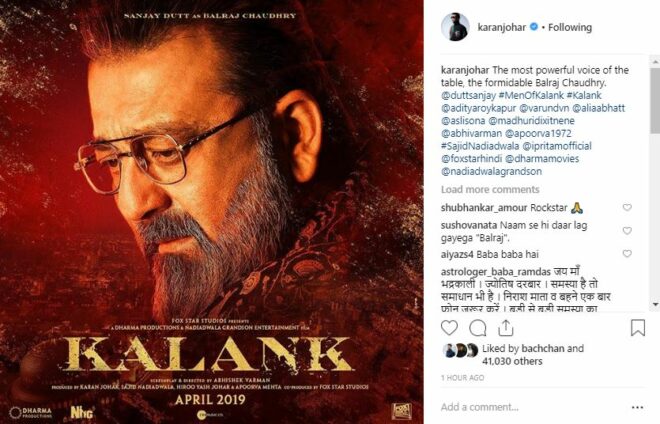 Sanjay’s character looks like someone who, despite being in power and being the most “powerful voice of the table,” is a down to earth and compassionate. He looks intense in the poster, sporting a salt and pepper beard look and wearing old school glasses.

Alia Bhatt described his character as, “If #Kalank was a kingdom, he would be king! Presenting Balraj! #MenOfKalank #Kalank.”

Earlier in the day, the makers of the period drama released the character posters of Varun and Aditya and they plan to reveal the look of the leading leads, Alia Bhatt, Sonakshi Sinha, and Madhuri Dixit on the occasion of International Women’s Day tomorrow.

KJo shared the first glimpse from the upcoming film last night and also penned an emotional note. The filmmaker went onto share that how much the film, that was conceptualized 15 years ago and one on which even his late father Yash Johar worked on, meant to him.

Set in the 40s, the film was envisioned by Yash Johar and Karan tried to make it a reality.