New Delhi: After impressing the audience with her stellar performance in ‘Kabir Singh’, Kiara Advani is all set to star in Netflix’s next titled ‘Guilty.’

The actor will be seen portraying the role of a rockstar in the film which marks the digital journey of Dharmatic (Dharma Productions’ digital platform).

Karan Johar shared the first look of the actor from the web series on his Instagram and penned a heartfelt post expressing his happiness over the project.

“I feel so proud of you Kiara Advani. A super journey from lust to intense love to now hipster and forceful !!! Here’s announcing Dharmatic first feature for Netflix India GUILTY!” Karan wrote alongside the picture.

“Directed by Ruchi Narain. Gratitude to NETFLIX for being a rockstar platform and always on fleek with the times! And to the rocking force who bears all my creative tantrums and silently rocks and rules the motions! Apoorva Mehta and to the constantly ticking solid mind of Somen Mishra who heads our fictional development at Dharmatic! Our journey into the digital domain begins! May the force of good content always empower and bless us! And let’s end by saying! Kiara Advani, you go girl!!!,” he went on to say. 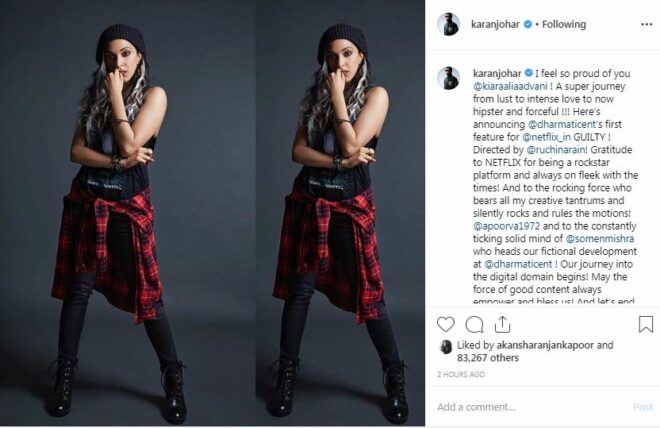 In the picture, the 26-year-old actor can be sporting a t-shirt and black track pants with a red shirt tied around her waist. The highlight of the look is her hair, which is colored blond to give her a hipster look.

The film will be directed by Ruchi Narain and produced by Karan Johar and Apoorva Mehta.

This will be the second time the actor is collaborating with Karan Johar on the digital platform. Last year, Kiara made her Netflix debut with an anthology film titled Lust Stories which was directed by KJo.

Currently, Kiara is basking in the success of ‘Kabir Singh’, which set the cash registers ringing by crossing the 50 crore mark in just three days of its release.

The film managed to rake in Rs 70.83 crores over the weekend.

Kiara will be seen next in ‘Good News’ where she will be seen sharing screen space with Akshay Kumar, Kareena Kapoor Khan, and Diljit Dosanjh. The actor has also signed her first female-centric film ‘Indoo Ki Jawaani.’