New Delhi: Ranveer Singh, who is all geared up to play the role of cricketer Kapil Dev in his upcoming film ’83’, couldn’t contain his excitement after meeting two legendary cricketers Sachin Tendulkar and Vivian Richards.

The actor treated his fans with pictures featuring him with the cricketers.

Ranveer posed for a happy picture with the “God of cricket”. 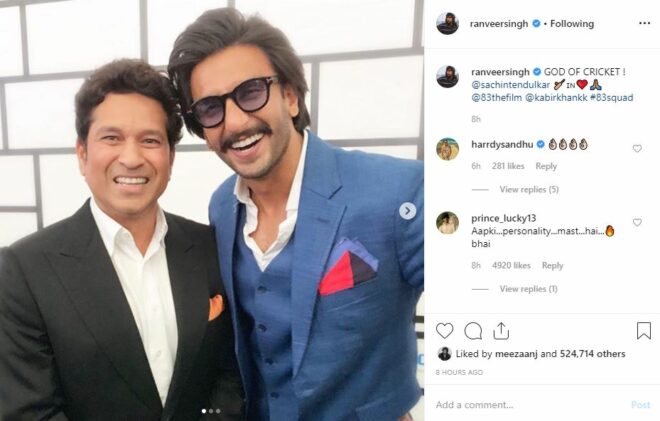 He also shared another photo featuring him with “the incomparable sir” Vivian Richards. 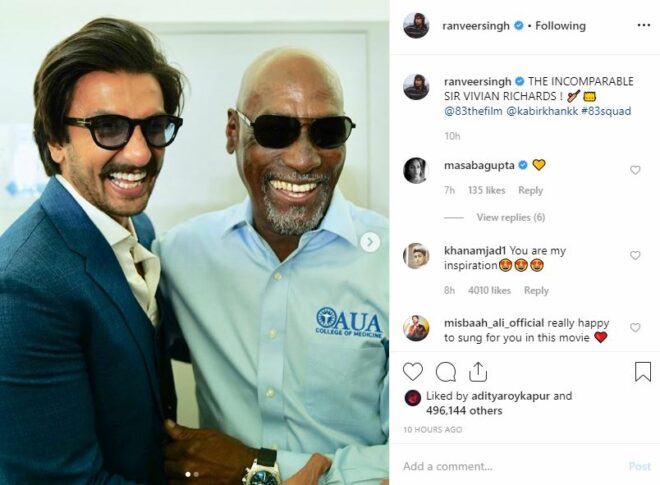 To add more power to his character, Ranveer also met other legendary cricketers Sunil Gavaskar and Shane Warne and shared pictures with the players.

The Bollywood powerhouse is leaving no stone unturned to get into his character. Some time back, ahead of the London schedule, the ‘Gully Boy’ actor shared a still in which he was seen jotting down notes from the ace cricketer at his residence. Giving a glimpse of his session, Ranveer shared pictures on Instagram and wrote, “Becoming the Hurricane.”

Ranveer has been sweating out to do full justice to the role. Last month, the actor shared a video, which showed Ranveer working out in a gym and practicing on a cricket pitch in the picturesque town of Dharamshala in Himachal Pradesh.

The clip also features the actor training with Kapil, who was the captain during India’s 1983 World Cup win.

The film is based on the legendary cricketer Kapil Dev, who lifted the World Cup for India in 1983 and also coached the team from October 1999 to August 2000.