The actor expressed his happiness and thanked everyone for the overwhelming response.

“Big thk u sabko fr giving sabse bada opening mere career ka par what made me the happiest and proudest is ki during a scene in my film jab national anthem is recited ev1 stood up as a mark of respect. There could be no bigger respect for our country than this… Jai Hind Bharat,” Salman wrote ob Twitter. 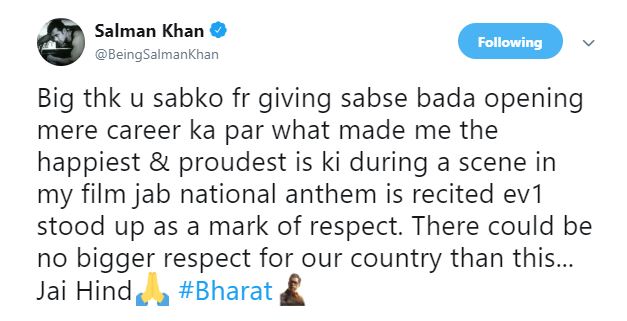 His last two Eid releases, ‘Tubelight’ and ‘Race 3’ had a lackluster start at the box office. By raking in Rs 42.30 crore on its first day, ‘Bharat’ has proved to be both Salman’s biggest Eid opener as well as his highest ever opener ever.

Adarsh also noted that despite the tough competition from the much-hyped India vs South Africa World Cup match yesterday, Bharat emerged as a winner at the box office.

The trade analyst also shared that the film is among the year’s biggest openers along with ‘Gully Boy’, ‘Total Dhamaal’, ‘Kalank’ and ‘Kesari’.

The ‘Bajrangi Bhaijaan’ sports five different looks in the film spanning 60 years, including a crucial part showcasing the actor in his late 20s, looking much leaner and younger.

Directed by Ali Abbas Zafar, ‘Bharat’ is an official adaptation of the 2014 South Korean movie ‘Ode To My Father’.
This marks Salman’s third collaborating with Zafar after ‘Sultan’ and ‘Tiger Zinda Hai’.

Apart from ‘Bharat’, Salman will be seen in Prabhu Dheva’s ‘Dabangg 3’ and Sanjay Leela Bhansali’s ‘Inshallah’.