Hong Kong: Samsung’s folding phone is longer a thing of the future as Samsung unveiled its most anticipated smartphone ever, which comes with a foldable screen.

The phone, which was announced on Wednesday in San Francisco has been named as Galaxy Fold and will soon be available in the markets for a whopping USD 1,980, reported South China Morning Post.

The phone will release on April 26. Samsung also took to its Twitter handle to share the news alongside a clip of the new phone.

“Ten years after the first Galaxy, we didn’t just change the shape of the phone, we changed the shape of tomorrow. #GalaxyFold,” Samsung tweeted. 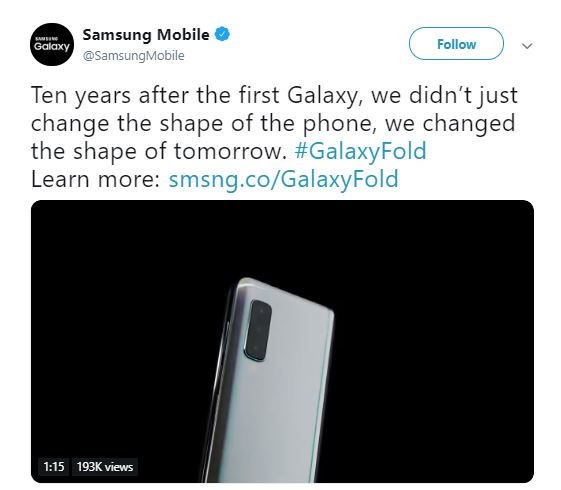 Customers who are willing to spend that hefty price will get a unique device that’s partly a smartphone and partly a tablet. One can unfold it like a wallet so it can work like a smartphone with a 4.6-inch screen or one can fold out on its long edge into something more like a mini-tablet with a 7.3-inch screen.

It comes with some interesting features like the device, when fully unfolded, will be able to simultaneously run three different apps on the screen.

“Get ready for the dawn of a new era,” said DJ Koh, who oversees Samsung’s smartphone division. The new phone, according to him, “answers sceptics who said everything has already been done.”

Samsung is hoping that the Galaxy Fold will prompt more people to upgrade their phones and will also reverse a recent decline that saw its smartphones sales fall eight per cent last year. However, some analysts were sceptical.

Phones like the Galaxy Fold “ are likely sold to a very limited market of technology aficionados who like big screens and have big wallets,” said analyst Ramon Llamas.

Samsung also released its other lineup of products–new Galaxy S10 phones— the S10e, S10 and S10+, they all boast of fancy cameras, sleek screens covering the entire front of the devices and 128 gigabytes of storage.

The new phones are able to take wider-angle shots than the previously available models and can also charge other devices, including wireless headphones and smartwatches.

A fourth S10 model, which is due this spring, will have faster wireless speeds through the emerging 5G cellular network.

However, these improvements aren’t a big leap from the smartphones released during the past few years by brands like Samsung, Apple and other manufacturers. Consumers are holding on to their existing devices for longer periods than they have in the past.

That’s one of the main reasons smartphone sales dropped 4 per cent worldwide last year, according to the research firm International Data Corp.
Samsung is also offering a slightly smaller S10 model for USD 750 to make phones more affordable for customers, but the higher-end devices sell for USD 900 and USD 1,000.

The brand took to its Twitter handle to share a clip of the newly-launched S10 phones, writing, “A next-generation device in a size that’s just right for you. #GalaxyS10 #SamsungEvent.” 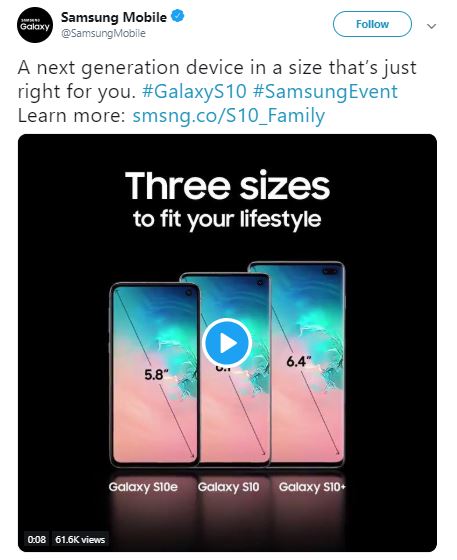 Samsung will start accepting pre-orders for the phones on Thursday and all three S10 smartphones will come out March 8.

Get the news updates on WhatsApp & Telegram by subscribing to our channels. For all the latest Mobile updates, download our app Android and iOS.