Taking her fans down the memory lane, Sonam took to Twitter and shared a special message dedicated to everyone who was associated with it.

Sharing a clip featuring some glimpses from the film, Sonam wrote, “It’s one year to the wildest and craziest film with the most fun-loving crew ever. From cracking jokes to binging and laughing non-stop, my Veere’s and I had a fabulous time shooting this film. Thank you to everyone who was part of our incredible journey.”

It’s one year to the wildest and craziest film with the most fun-loving crew ever. From cracking jokes to binging and laughing non-stop, my Veere’s and I had a fabulous time shooting this film.
Thank you to everyone who was part of our incredible journey!#OneYearOfVeereDiWedding pic.twitter.com/8dNdfFzE9O

The actor earlier in the day also posted a heart-warming note on her Instagram account along with a super sweet picture featuring her with Kareena, Swara, and Shikha.

While stating that she had made life-long friends with the leading ladies, she also thanked the people behind the project including her sister and producer of the film Rhea Kapoor, co-producer Ekta Kapoor and director Shashank Ghosh.

“One year since @vdwthefilm released. I’ve made life long friendships with these amazing women. Love you my veeres. Also @rheakapoor you broke the glass ceiling with a fucking hammer unapologetically. I love you and I’m so proud of you. Thank you @ektaravikapoor for being such a girl boss, you are an inspiration. @ghoshshashanka you always bring out the bestest in me…

can’t wait to do another amazing film with you. Love you all,” she captioned the post. 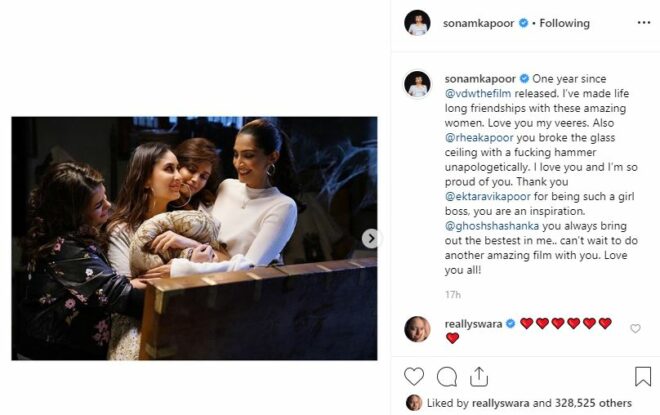 The film, headlined by four female actors with no big male lead, received an overwhelming response from the audience and critics alike. It also held strong at the box office.

The film revolves around four female friends (played by Sonam, Kareena, Swara, and Shikha) and the various ups and downs in their lives. It tells the story of the trials of four women through several stages of life including marriage and inability to commit in a relationship among others.

The movie created quite a stir right after it was released thanks to the bold storyline, four female leads, swear words, slapstick moments and some hilarious one-liners.

On the work front, Sonam will be next seen in ‘The Zoya Factor’, co-starring Dulquer Salmaan. Based on a novel of the same name by author Anuja Chauhan, it tells the story of an advertising executive who ends up being a lucky charm for the Indian cricket team.