The actor took to his Instagram stories to share a small clip from the birthday celebrations on Tuesday night.

In the video, Natasha can be seen cutting her birthday cake surrounded by friends. She is later seen blowing the birthday candles as her friends sing ‘Happy Birthday’. 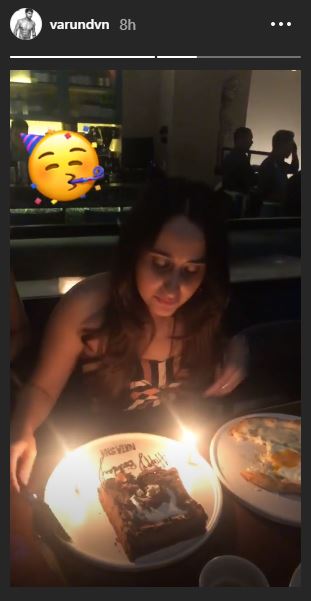 Varun had opened about his relationship with Natasha a while back and ever since, the two have made many public appearances together.

In a recent interview, the ‘Badrinath Ki Dulhania’ star said, “My first love is films and everyone in my life knows that. After that comes Natasha, my family, and my friends. I just don’t make relationships to let go of them.”

The 32-year-old had also revealed how Natasha influenced him to take up some of the projects he has been a part of.

“Actually, I decided to do a film like ‘Badlapur’ or ‘October’ because of her. It’s because of her and some of our friends that I do slightly different films. They like such kind of cinema,” Varun said.

The ‘Judwaa 2’ actor also opened up about Natasha on an episode of ‘Koffee With Karan’ season 6.

Gossip mills were buzzing with rumors that Varun was planning to get married to Natasha this year. However, the actor refuted the same and said work is keeping him busy this year.

He will be next seen in Remo D’souza’s ‘Street Dancer’ alongside Shraddha Kapoor.