New Delhi: At the time when the entire nation is cheering for team India in the ongoing Cricket World Cup 2019, as the Indian cricket team takes on New Zealand in the semi-final match of the tournament, Bollywood actor Varun Dhawan and the squad of his upcoming film ‘Street Dancer 3D’ have a special wish for the Men in Blue.

Showing his enthusiasm for the ongoing match, Varun posted a picture featuring him with his co-stars wearing Team India jerseys and wrote, “Let’s go team IN #SD3.” 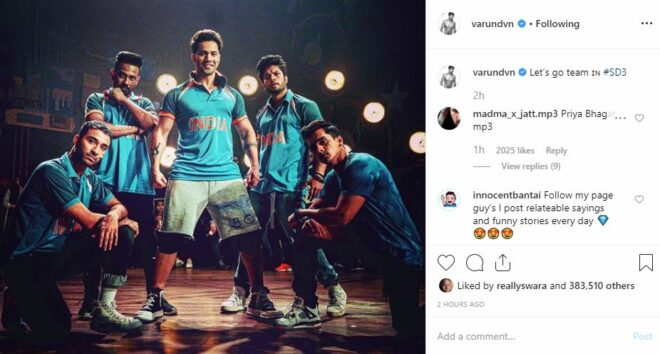 Varun has always been a sports enthusiast and is a hardcore cricket lover. The photo has already received over 2 lakh likes so far, with fans cheering for the Indian cricket team in the comments section.

Apart from Varun, several other stars took to social media to send their hearty wishes for team India.

Hrithik Roshan who is currently busy promoting his upcoming film ‘Super 30’, will be present in the commentary box from the broadcast studio.

Announcing the same, he tweeted, “It’s a big day for #TeamIndia, and I can’t wait for the action. That’s why I’ve decided to go straight to the Star Sports studio! Watch me cheer on the #MenInBlue on #PhilipsHue #CricketLIVE today, only on Star Sports. Super30.”

On the other hand, Preity Zinta, who is a cricket buff, also took to Twitter to wish the team.

She tweeted, “All the best to #TeamIndia for the semi-finals. Looking forward to an exciting game. Come on INDIAAAA. #INDvNz #SemiFinal1 #Ting”

Actor-politician Kirron Kher too sent out her warm wishes for the team and had a special mention for team India captain Virat Kohli and opening batsman Rohit Sharma.

Suniel Shetty too lent his support to the Indian cricket team and wrote, “You’ve won the best matches playing your natural game …. play hard have fun … wishing you the very best #TeamIndia.”

Currently, Varun is shooting for ‘Street Dancer 3D’. The film, which also has Shraddha Kapoor, Nora Fatehi and Prabhudheva, is touted to be the most expensive dance film that Bollywood has ever seen.

Produced by Bhushan Kumar, Lizelle D’Souza and Krishan Kumar, the film is all set to hit theatres on January 24, 2020.