New Delhi: Mark your calendars as Bollywood actor Vicky Kaushal’s next outing ‘Sardar Udham Singh’, a biopic based on the legendary freedom fighter, will release on October 2, next year. 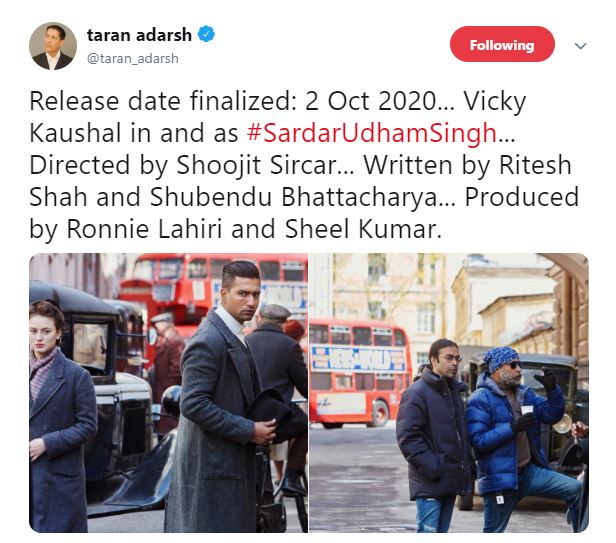 The first look of the film featuring the ‘Masaan’ actor came out on April 30, this year. In the first look pictures shared by Adarsh, Vicky is seen sporting a vintage look with a long coat and a hat in his hand. In another picture, director Shoojit Sircar is explaining a scene to the ‘Manmarziyan’ actor.

Helmed by Shoojit Sircar, Vicky will be seen essaying the role of Udham Singh in the film. Singh, a revolutionary belonging to the Ghadar Party, assassinated Michael Dwyer in revenge for Jallianwala Bagh massacre in Amritsar.

The film is penned by Ritesh Shah and Shubendu Bhattacharya and produced by Ronnie Lahiri and Sheel Kumar.

The upcoming biopic is set to lock horns with the Hindi remake of Sylvester Stallone’s ‘Rambo’, starring Tiger Shroff, which will be directed by Siddharth Anand.