Chennai: Actor-turned-politician Kamal Haasan who drew flak from all political quarters and Hindu groups for his remarks on Nathuram Godse, on Saturday once again stoked a possible controversy by saying that the word “Hindu” is of foreign origin and not native to India.

Taking to Twitter, Makkal Needhi Maiam (MNM) founder Haasan shared a poem on Friday in Telugu saying “the name Hindu was given by foreign rulers”.

Haasan said the term ‘Hindu’ was given by Mughals or by others who came earlier to rule, adding that the British who later ruled the nation seconded the term.

He said that neither the Alwars and Nayanmars, poet-saints in southern India during the first millennium CE, gave the religious note “Hindu”.

Citing a Tamil proverb – “Living in harmony has a million benefits”, the MNM chief opined that shrinking the nation within religion is commercially, politically and spiritually wrong.

“Neither 12 Alwars nor 63 Nayanmars gave the religious note “Hindu”. We were named “Hindu” either by Mughals or those who ruled earlier. British who ruled and returned seconded that adjective. When we have our own identities how ignorant to embrace an outsider given name as our name or religion.

READ:  Congress Party President election to be held in May

Though our identity as “Indian” is recent it would live beyond times. To think of shrinking our wide nation within religion is commercially, politically and spiritually wrong. If we live together we would get crore benefits. How many times this proverb has been told to Tamilians,” he said in his tweet. 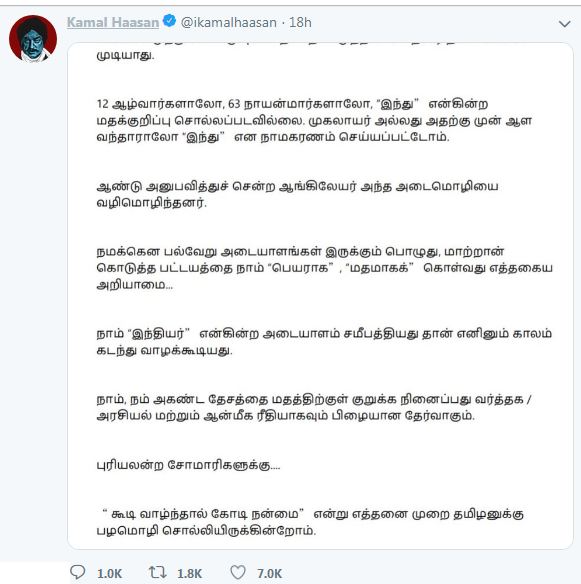 Haasan who has been receiving backlash since past few days for his remark that the “first terrorist in independent India was a Hindu” said yesterday that every religion has its own terrorists and one cannot claim oneself as “sanctimonious”.

The actor-turned-politician maintained that history has shown that all religions have their extremists.

Reacting to the incident in which stones were thrown at his rally in Tiruchirapally recently, Haasan said, “I feel the quality of polity is going down. I don’t feel threatened. Every religion has its own terrorist, we cannot claim that we are sanctimonious. History shows that all religions have their extremists.”

Issuing a clarification over his remark that the “first terrorist in independent India was a Hindu”, he had said, “I have said the same thing before. It’s not the first time but it’s been blown out of proportion.”

“I am not afraid of being arrested. Let them arrest me. If they do that it will only create more problems. It is not my warning but only advice,” he added.

Following his remarks on Godse, the BJP and its Tamil Nadu ally AIADMK and some Hindu outfits slammed Haasan on the issue saying he cannot mix up an assassination with terror and link it to Hindus.